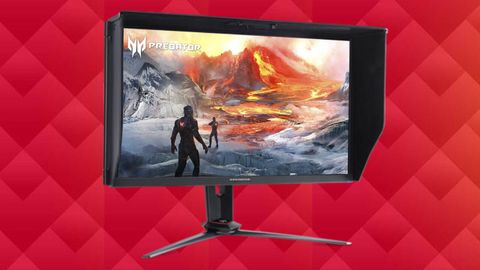 By eschewing the full-array backlight and 1,000 nits peak brightness, the Acer Predator XB273K will save buyers around $500 while still delivering stunning gaming performance and professional-level color accuracy. It’s one of the best monitors we’ve ever tested.

In the fall, we reviewed the Acer Predator X27 and Asus ROG Swift PG27UQ?HDR?gaming monitors. Both panels deliver?UHD?/?4K resolutions?with 144Hz refresh rates, pack in HDR10 and extended color gamuts and have full array backlights capable of delivering over 1,000 nits worth of brightness. At the time of writing, they also come with an $1,800 (£1,800) price tag. But what if you could have everything, excluding that 1,000-nit full-array backlight, for just $1,300 (£1,200)? If that sounds appealing, then it’s time to check out the Acer Predator XB273K.

Recently, we’ve seen several monitors carrying the VESA DisplayHDR 400 certification. This simply means they will support HDR10 up to a peak white level of 400 nits. They're a cheaper alternative to 1,000-nit models, like the aforementioned Predator X27 and ROG Swift PG27UQ, while still delivering on that buttery smooth yet crisp promise of a 144Hz refresh rate at 4K. Couple that with support for?Nvidia’s G-Sync, and it’s a lot more palpable.

The Predator XB273K offers another feature that one would not expect in a gaming screen: professional-level color accuracy. As you’ll see in our benchmark tests, it has some of the best out-of-box color reproduction we’ve ever seen.

The XB273K is a 27-inch?IPS panel, with the AHVA moniker added to its spec. This stands for Advanced Hyper Viewing Angle (not vertical alignment). It should not be confused with AMVA. which delivers much higher native contrast. AHVA is supposed to mean better off-axis image quality, and in some, but not all, cases that is true. Other than that, it is no different than any other IPS panel, which typically boasts strong color performance, impressive viewing angles and usually a 4ms gray-to-gray response time.

The backlight employs a quantum dot film to extend the color gamut up to a claimed 90 percent of the DCI-P3 spec. That, along with a 400-nit peak white level makes the XB273K an excellent candidate for HDR10 content. Though it won’t deliver the punch of a full-array backlit model, Acer has engineered an effective variable dimming feature that quadruples the monitor’s contrast ratio. What’s impressive about this is that you can take advantage of that option with both SDR and?HDR?content.

HDR aside, gamers will appreciate the inclusion of that reliable 144Hz overclock working in tandem with G-Sync operating from 24-144Hz. On top of that you also get aiming points, a framerate counter and effective overdrive. The only thing missing is ULMB (ultra-low motion blur), which we suspect will not be a deal-breaker for most.

The XB273K ships fully assembled.?Just lift it out and you’re ready to rock… Unless of course you want to install the professional artist light-blocking hood. Yes, a pro-grade hood is included that bolts to the provided fittings on the panel.

There's also a factory calibration report. Though Acer doesn’t market it as a professional product, it is fully qualified for color-critical applications, according to our testing.

DisplayPort and USB cables and an external power supply brick round out the accessory bundle. A cover snaps over the input panel on the back to hide any unsightly wiring and help tidy up your cables.

The Predator XB273K doesn’t scream for attention the way many?gaming monitors?do. It’s a conservatively stylized design with just a few small logos. One badge on the front bezel is a symbol for Delta E color accuracy. This and the calibration report are the only clues that you’re buying a phenomenally color-accurate monitor. Otherwise, it’s all about gaming.

Underneath the front edge of the panel is an LED lighting feature you can control from the on-screen display (OSD). You can shift the colors manually and engage different flashing and breathing effects, or have the light indicate your G-Sync status, which is super-handy.

The bright and sharp 4K image shines through an effective anti-glare layer that imparts no artifacts in the process. Tiny details and fonts are clear as day, both on the desktop and during gameplay, and when Variable Backlight is turned on, contrast is as solid as any VA screen we’ve reviewed.

You can further enhance the dynamic range by installing the rigid light hood. It comes in three pieces and bolts to the bezel with included hardware and fittings. It’s also handy at keeping your opponents from seeing your game screen at those LAN parties and competitions.

The stand is a well-built affair with a deep and wide stance. You’ll need just over 1 foot (30cm) of desktop depth to accommodate it. Movements are firm, but there is a little play where the panel meets the upright. Swivel is 20 degrees in either direction, and you get -5 to 20 degrees of tilt. Height adjustment range is just under 4 inches (10 cm). To access the 100mm VESA mount in the back, remove the plastic shroud and unbolt the factory stand. A chunky metal adapter is there for aftermarket brackets and arms.

The input panel is sparse and includes one each of HDMI 2.0 and DisplayPort 1.4 outputs. You’ll need to use the latter for G-Sync, but both plugs support 144Hz operation. USB 3.0 comes in a single upstream port and four downstream ones. Two are on the side, and the rest are around back.

The OSD is quite extensive, and although little adjustment is required for a stellar image, some of the options will be unfamiliar to those inexperienced with HDR and wide gamut displays. Most of the important items are in the Picture menu. Brightness is dubbed “Peak white (nits),” and its numbers are fairly close to the corresponding white level. The Blue Light option warms the color temp to help mitigate eye fatigue during long work sessions. Dark Boost increases shadow detail to help one better see foes in drearily lit game areas.

Backlight Response offers three options for the variable backlight, which is an extremely effective dynamic contrast feature. You can use it for SDR content at your discretion, and it’s locked on during HDR operation. Auto Brightness and Auto Black Level work with a top-mounted sensor to adjust the image according to your room’s lighting setup. This feature is a matter of personal preference, and its effectiveness depends on your environment. If you have a sunny window, the picture may change before your eyes as clouds drift by or the sun’s position changes throughout the day.

You can access picture modes via one of the control keys. There are eight modes, three of which you can alter. If you change any setting, the XB273K automatically shifts to User mode.

In the Color menu, you can perform a calibration by using the RGB sliders and a group of gamma presets. But you won’t need to do that because this monitor is fantastic right out of the box. By default, it’s set to produce DCI-P3 color, but if you want sRGB for SDR content, just turn on “SDR Colors sRGB.”.

The Gaming menu has a two-level overdrive control, an?overclock?that takes the refresh rate from 120Hz to 144Hz and a selection of aiming points. The framerate counter is found in the menu section named OSD. At the bottom left is a Save Settings To option, which lets you save everything to one of the three gaming picture modes, a neat addition.

After running our initial color tests, it was clear the XB273K did not need adjustment. With average error levels under 1dE, there was simply no point. When we dropped the peak white level to a measured 200 nits brightness and turned the SDR Colors sRGB option on we still saw the full DCI color gamut when an HDR signal was present. Speaking of that, there are no adjustments available for HDR10 signals. Luckily, none are needed.

Below is a table with brightness values for commonly desired peak levels.

The XB273K switches seamlessly between SDR and HDR content. The first order of business is to turn HDR on in Windows via the Display Settings section. This renders all graphics in the DCI-P3 gamut, so if you plan to edit photos in the sRGB color space, you’ll have to turn HDR off and ensure that SDR sRGB Color is turned on in the OSD. For gaming though, stick with HDR. If you load an SDR title like Tomb Raider, the Predator switches back to SDR when you’re in the game. We tried both gamuts while playing and found a little more intensity in the DCI mode. It’s not perfectly accurate but will appeal to some users. We used the monitor’s LED effect to indicate G-Sync status, red when it’s on, white when it’s off.

Contrast was superb with the variable backlight on. At 200 nits, the ratio was over 2,000:1 nearly the same as many VA panels. This is great for gaming, as well as productivity and video. We saw no need for the Dark Boost or the Auto Black Level features. Shadow detail was always prominent and visible, even in the darkest and murkiest game environments.

Framerates were strong thanks to our Nvidia GeForce GTX 1080 Ti FE?graphics card. Tomb Raider ran at 90-100 frames per second (fps) with details maxed. Overdrive worked best on the Normal setting. Extreme showed a tiny bit of ghosting and didn’t make motion any smoother. At these high speeds, blur was a non-issue because G-Sync ensured a complete absence of frame tears. Thin vertical lines refused to break up no matter how quickly we moved the mouse.

When we loaded our HDR copy of Call of Duty: WWII, we enjoyed superb contrast with rich, bold color. Framerates were solidly in the 115-120 fps range with details maxed, and again, there was no sign of tearing or motion blur. Input lag was imperceivable as gameplay always kept up with our mouse and keyboard commands. The image remained bright with highlights that really popped. Effects like water droplets and sweat looked impressive. That’s an element where HDR really makes an impact. Additionally, smoke elements and cloud and skybox textures were completely free of banding. A quick check of the OSD confirmed the monitor's pseudo 10-bit operation was working as intended.

Next Page Brightness & Contrast
Be In the Know