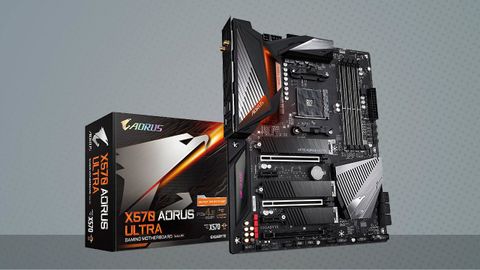 The X570 Aorus Ultra strikes a balance between needed features and reasonable pricing. It forgoes things like 2.5G Ethernet, focusing instead on solid audio, three PCIe 4.0 M.2 slots and a full array of SATA and USB ports.

Priced at $299.99 on Newegg, Gigabyte’s X570 Aorus Ultra lands solidly in the mid-range segment of boards for this chipset, at least one of which sells for $1,000. Gigabyt’es $300 Ultra board includes solid VRMs, theme-agnostic styling, three PCIe 4.0 x4 M.2 slots, Wi-Fi 6, premium Realtek audio and six SATA ports on an full-size ATX board.

Gigabyte’s Aorus boards are the company’s gaming and enthusiast lineup, usually including features such as RGB LEDs, metal “armor” on the DIMM and/or PCIe slots, electrostatic discharge (ESD) guards, along with more of a focus on styling. The Aorus Ultra fits that mold, while offering a wide array of functionality at a reasonable price point. Gigabyte’s X570 lineup includes common board sizes and a wide range of price points, from the entry-level X570 UD to the flagship X570 Aorus Xtreme offering a bit of something for everyone, even a Mini-ITX board in the X570-I Aorus Pro Wi-Fi.

The Gigabyte X570 Aorus $300 price point lands it on lower end of X570 mid-range boards. Its direct competition includes boards like the ASRock Phantom Gaming X, the Asus ROG Crosshair VIII Hero, and the X570 Aorus Master. This Aorus  board is priced notably cheaper than those models, so some features may be passed up here in favor of the lower price. But our overall experience the X570 Aorus Ultra was positive. It managed to run through stock testing and overclocking without a hitch. Performance was right around all of the other X570 motherboards tested.

As with other boards on this platform, the X570 Aorus Ultra supports both Ryzen 2000 and Ryzen 3000 series processors. It includes a total of six SATA ports and four DIMM slots capable of supporting up to 128GB of DDR4 RAM. Memory speeds are listed up to DDR4 4400+(OC). This board also uses the latest Realtek ALC1220-VB chip to push out the audio. Below is a complete list of specifications from Gigabyte.

The Aorus Ultra includes the basics in terms of accessories, with install guides, SATA cables, Wi-Fi antenna, screws, temperature sensors and more. Outside of the typical basic accessories, the Ultra includes a small PCB that plugs into the front panel header for power and reset button functionality. So instead of integrating the buttons on board, this small PCB is used instead. The complete list is below.

The board itself is black with some silver/aluminum color highlights as an overarching theme. The heatsinks on the VRM are both black and mostly covered by shrouds. Other aesthetic highlights include the Aorus naming on the IO shroud, three heatsinks for the M.2 slots, as well as the Ultra Durable PCIe and memory armor around those slots. The chipset heatsink sports a small fan and a vented shroud to keep the chipset running cool, and its aluminum finish provides a nice contrast.

RGB lighting comes from two locations on this board, the shroud over the left VRM heatsink and audio section advertising its Amp-Up audio solution. The former lights up the Aorus branding on the shroud and gives a nice glow through the VRM heatsink. If you are looking for RGB lighting and prefer it not to be a bright disco show, this implementation here strikes a good balance. If additional RGB illumination is needed, the board includes a few headers for lighting expansion.

Starting at the top of the board, the Aorus Ultra provides shrouds to cover up some of the more unsightly parts of the motherboard/VRMs. The VRM heatsinks are connected to each other via a direct-touch heatpipe (the heatpipe is in direct contact with the VRM ICs), which Gigabyte says provides 30% lower MOSFET temperatures.

The VRM heatsinks are a bit different than most we see and use a fin array instead of a more block-like heatsink. The fin design -- the company says -- increases heat dissipation area by 300% when compared to traditional heatsinks of the same size. Gigabyte also uses 1.5mm-thick thermal conductivity pads said to transfer 2.7 times more heat than traditional thermal pads. In the end, the heatsink design had no issues handling or Ryzen 7 3700X and would likely not flinch with a more powerful chip.

Gigabyte lists the VRMs as a 12 + 2 setup. These are controlled by an Infineon IR35201 6 + 2 phase controller. In order to reach the 12 total phases on the board, Infineon IR3599 phase quadruple/doublers are used on the CPU side (in doubled mode), along with 40A PowIRstage IR3553 MOSFETs. Power is sent to the VRMs via a required 8-pin EPS as well as an optional 4-pin both located in the upper-left corner. The setup, while not the most robust we’ve seen, should handle all the Ryzen CPUs at stock speed and overclocked when using ambient cooling.

To the left of the EPS connectors is the first (of seven) 4-pin fan/pump headers. Moving over to the right of the socket above the DRAM slots are two more headers (CPU and CPU_OPT). All on-board fan headers are of the hybrid variety and support both PWM and DC powered fans.

In the upper-right corner are two (of five) RGB LED headers. The first is a 3-pin addressable header (5A/5V), while the 4-pin is a standard header supporting up to 2A/12V. If the integrated RGBs are not enough, the five total headers solve that problem.

On the right side of the socket we can see the four reinforced DIMM slots that use a locking mechanism on both sides. We populated all four slots with our 32GB test memory and had no issues running them at 3200 MHz (platform base spec) or 3600 MHz, what the memory is rated for and what AMD says is the sweet spot. It did take a bit of tweaking SOC voltage to get there on the latter, but it worked in the end.

Located just to the right of the DRAM slots is the QFlash_Plus button, which allows the board to be flashed without using a CPU. Simply plug your USB stick in with the BIOS on it in the specified port out back (white USB port) and you can get the latest BIOS without a CPU installed. This is a particularly useful feature for future processors that are not supported by the installed BIOS.

Just south of there is the 24-pin ATX connector, feeding power to the board. Below are three more 4-pin fan headers (SYS_FAN4, SYS_FAN2, and SYS_FAN_PUMP). Sitting immediately to the left of these headers is a 2-pin header designed for use with the included thermistor. With this, users are able to use an additional data point to control fans. This is an unexpected feature at this price point.

Next up is the USB 3.2 Gen 2 Type-C header found just to the right and bottom of the DRAM slots. Finally, to the right of it is the DRAM QLED area. These four LEDs light up on boot to note where it is in the POST process. If for some reason the system gets hung while doing so, the LED will stay lit and shows the users where things went wrong. This covers the CPU, GPU, DRAM, and BOOT functions. If a 2-digit LED isn’t available, this is the next best thing for troubleshooting boot issues.

The bottom half of the Aorus Ultra isn’t fully clad in shrouds and heatsinks, but we can see a shroud covering most of the audio bits, the three heatsinks for each M.2 slot, as well as the brushed-aluminum chipset heatsink with vents to allow cool air in and moved by the fan.

The audio bits on the left have a plastic cover with the words “Amp-Up Audio” backlit with RGB lighting. We can also spot the yellow Nichicon and red WIMA FKP2 audio capacitors here. The audio bits are also separated from the rest of the board by an orange line, as is typical on most all boards today. The ALC1220-VB codec currently is the best you can get on a motherboard.

In the middle of the board are three full-length PCIe slots with the top two primary GPU slots incorporating the Ultra Durable steel armor to help hold up bulky cards -- or just to look pretty. In Between these slots are two x1 slots. The primary slots support PCIe 4.0 in a x16 or x8/x8 setup. This configuration supports Nvidia Quad-SLI  and 2-Way SLI as well as AMD Quad Crossfire and 2-way Crossfire. The bottom full-length slot is fed from the chipset, running at PCIe 4.0 x4.

The board slaps on three M.2 slots, all of which support both SATA and PCIe 4.0 x4 modules. The top two slots support up to 110mm sticks while the bottom supports up to 80mm. The top slots, M2A and M2B, do not share any lanes with oher devices. However, M2C (bottom slot) will disable SATA ports 4 and 5 when using a PCIe drive.

Continuing right, we can see the vented chipset heatsink and the Aorus falcon. The chipset fan has three different modes: silent, balanced, and performance, which Gigabyte says minimizes noise and extends the fan’s longevity. The company says the fan is of the ball bearing type and guarantees 60,000 working hours which is the highest we’ve seen. Outside of the initial spin up, the chipset fan is not audible over our GPU, AIO, and system fan.

Finally, the right edge of the board is where we’ll find the six SATA ports. Combined with the three M.2 slots, the six SATA ports gives users plenty of storage options and flexibility. RAID 0, 1, and 10 are supported on the SATA ports. Just note that as mentioned previously, if you are using a PCIe based module in the M2C slot, you will lose SATA Ports 4 and 5.

Across the bottom edge of the board are many headers and buttons responsible for various things. We spot USB headers, LED headers, audio, and more. Below is a list of all the headers, from left to right.

Swinging all the way around to the rear IO, we see the integrated IO shield which continues the Aorus theme here, too. In total there are 10 USB ports (four USB 2.0, three USB 3.2 Gen 1 and three USB 3.2 Gen 2), for plenty of USB connectivity by count and speed. We also spy the Wi-Fi antenna connection, an HDMI 2.0 port for use when using a CPU with integrated graphics, the Intel Gigabit Ethernet port and the 5-plug plus SPDIF audio stack.

Overall, there are plenty of USB ports including multiple USB 3.2 Gen 2 ports (one Type-C), a video output, and anything else needed outside of legacy PS/2 port for those still hanging on to ancient peripherals.

Next Page Software and Firmware
4 Comments Comment from the forums