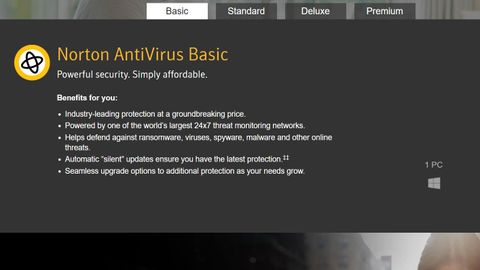 Norton’s antivirus solution is precise and easy to use but disappoints when it comes to ransomware protection.

Norton AntiVirus has been around since 1991, making it one of the oldest antivirus software solutions.

For this review, we used Norton AntiVirus Basic. However, Norton has since discontinued Basic and replaced it with Norton Antivirus Plus. The two are virtually the same with the same core security features, such as an underlying malware engine and associated services. However, Plus comes with bonus features in 2GB of cloud backup, a web management portal and a two-way firewall.

There are a lot of features, but we found some flaws in the software’s ability to detect new ransomware threats.

The initial annual subscription costs $39.99 for a one-computer, one-year license, with renewals costing $59.99 (about £45) per subsequent year.

First-year rates are equal to Bitdefender but pricier than other competitors. Plus some alternatives offer multiple devices and multi-year license options. For example, Bitdefender offers a three-device, three-year license for $83.99 total. Norton falls short by not offering discounts for additional devices.

Unfortunately, there’s no free trial for Norton AntiVirus. A Norton rep told us there is a 60-day money-back guarantee. However, you’ll still have to pay upfront and having to request the refund is less preferred than a simpler free trial offer.

The install process is really easy. However, during our setup process, the software identified another antivirus software which was already installed, Bitdefender, and asked to uninstall it. Although, there was an option to keep it, which we appreciate. We also like that we were warned about a potential issue, and that the user gets to be the final arbitrator of which software goes on their system.

During setup, Norton offers to install some browser extensions. One is Norton Safe Web, which warns users of dangerous websites. The other extension, Norton Identity Safe, gives the functions of a password manager. We consider them both valuable extras, but such software can be found as freeware, so Norton is only adding minimal value.

With the suite fully installed, it occupied 1.6GB of disk space, more than many competitors. Thankfully, with the larger C: drives these days, this shouldn’t be an issue. And Norton did not negatively impact our system resources otherwise. Plus, this software comes with 2GB of free online storage; although that is a very small amount of space.

Examining our test PC’s background processes we found only three, including the Chrome extension host, consuming less than 50MB of RAM, and they ran perfectly fine with no system slow downs.

Norton AntiVirus offers plenty of options and controls. The complete details of your PC’s protection status are cleanly displayed, which includes the timing for your last update and scan with buttons that get grouped into functional groups, including Security, Online Safety and Backup. Clicking on the buttons displays additional options, with total control of all the antivirus settings.

We found Norton’s scan tool simultaneously comprehensive and easy to use. Checking your system is as easy as clicking Security -> Scans, to start a scan immediately. There’s a choice of available modes: Quick or Full. plus a Custom Scan option to focus the scan on specific drives, folders or files to clear out malware.

Norton missed the mark by lacking options for lower level scans, like Avast or Avira. These competing programs offer more than just an archives scan, also allowing the user to specify the types of archives and the depth of nesting to support them (i.e., how many open archives). Still, the average user will be okay with what Norton offers.

For example, you can create a custom scan, such as one that checks D:Files and E:More and skip certain scan types, like rootkits or tracking cookies, to save time. Running can be automated with specific parameters, like when the system is idle and on AC power, for example.
You can also control what happens upon scan completion, including turning off the PC or putting it into sleep mode. While power users may find additional options elsewhere, mainstream users will be able to easily comprehend and use these custom features.

Performance-wise, scans use multiple CPU threads; however Norton is not overly grabby of system resources and will give back those threads when needed for another demanding application to optimize system performance.

Overall, Norton’s speeds were quite excellent. It also detected all of our test threats, without any false alarms -- a powerful combination for an antivirus software package.

Our own custom ransomware-like program works through a tree of test folders, opening and encrypting common images, videos and other documents. Since we created it and it’s a novel threat, Norton has not encountered it before, making it an excellent test of the software’s ability to detect and block ransomware by behavior only and without relying on the database of virus signatures for malware identification.

Norton fizzled when it came to handling our custom ransomware. With the executable test, the ransomware rapidly ground to a stop, which seemed encouraging. However, as we delved deeper, we found that the ransomware had encrypted some files. We were even more frustrated when we figured out that Norton provided neither an alert nor a pathway to recover the files.

We tempted fate and reran our custom ransomware. That resulted in identical performance, with the encryption of a few files before the ransomware went away with zero warnings.

After the third time running our ransomware, Norton shut it down and displayed an alert with information that a threat was neutralized.

On one hand, Norton detected and blocked the solitary ransomware. But on the other hand, this occurred with no warning, and there was potential for data loss with the time that elapsed before the detection and deletion of our ransomware. On our PC, the ransomware we ran successfully encrypted 454 files before Norton neutralized it. Competitor Kaspersky showed better performance, stopping our ransomware after the encryption of a handful of files and recovering the originals without loss of any data.

With testing finished, we assessed Norton’s impact on our system’s performance, with quite favorable results. Looking at the 2018 Consumer Security Products Performance benchmarks with PassMark Software, Norton’s impact on system performance was the lowest among the 15 contenders and performed superior to the minimal-impact Windows Defender. Therefore, while performance of a given software on any PC can be difficult to predict, Norton runs better than most, making this a strong contender for an older system.

If you’re unsure of where to look to locate a possible threat, there’s Norton Insight, a tool that scans processes to quickly highlight any possible malware, at least worth a closer look.

The browser extension protection from malware is more clunky compared to the sleek software solution. However, Norton still excels at URL blocking, making this extension well worth installation if your browser doesn’t don’t already have this type of software.

Additionally, you’ll find bonus tools that are useful for junk files deletion, hard drive defragging and startup program management. These programs are hardly an afterthought and can go toe-to toe with their competitors. For example, the Startup Manager can not only list the startup programs, but also display the number of other Norton users using them. Furthermore, it allows the user to specify a delay in startup to smooth out the boot process and also gives the option to turn them off. Still, power users will point out that freeware tools, including CCleaner, provide plenty of PC maintenance functionality.

Norton AntiVirus has inherent advantages, such as being accurate, low on system resources, quick and flexible.

However, alternative antivirus solutions Bitdefender and Kaspersky demonstrated better performance on the critical tasks of ransomware and file recovery.

But if you’re looking for an antivirus software with minimal impact on your PC, Norton still has quite a high virus detection rate in general.