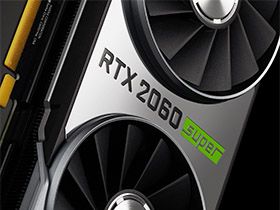 Although we aren’t sure who asked for something in between the GeForce RTX 2060 and GeForce RTX 2070 Super, Nvidia’s GeForce RTX 2060 Super does deliver smooth frame rates across our benchmark suite at 2560 x 1440 at maxed-out detail settings. Support for real-time ray hybrid ray tracing technologies should become even more of a differentiator as time passes.

Nvidia bet big on real-time ray tracing with the Turing graphics architecture. And back in 2018, the company’s skeptics wondered if that gamble was a smart one. Today, after significant performance optimizations across the first batch of ray-traced games, along with a growing list of upcoming triple-A franchises pledging to add the technology, it seems pretty clear that a lot of respected developers really want ray tracing in their projects.

Now it’s just a matter of making fast-enough hardware accessible to a broader audience. The lowest-end Turing-based board with ray tracing acceleration is GeForce RTX 2060, and it starts at an eyebrow-raising $350/£330. GeForce RTX 2070 sells for as little as $500, while the 2080 can be found for $700. Nvidia’s own overclocked Founders Edition models commanded $100 premiums above and beyond the cheapest partner cards, but those are out of stock and unlikely to return.

Today’s launch of GeForce RTX 2060 Super, GeForce RTX 2070 Super, and GeForce RTX 2080 Super sees Nvidia making RTX cards available at more diverse price points, bumping performance across the board, and doing away with the Founders Edition tax. All of these cards offer performance that's superior to that of their predecessors, but at publication time, the RTX 2070 Super in particular took a place on our list of best graphics cards.

Although we’re discussing a trio of new products, the GPUs they center on and their underlying architectures remain unchanged from what we introduced in Nvidia’s Turing Architecture Explored. We all know the impetus for these Super cards is renewed competition from AMD’s upcoming Radeon RX 5700 and 5700 XT. However, Nvidia says it’s simply taking advantage of improved yields and process tweaks to juggle on-die resources and clock rates.

How do these cards compare to AMD’s upcoming Navi-based boards? Radeon RX 5700 XT, which we expect to slightly beat or tie the original GeForce RTX 2070, is priced at $450. That’s right in between GeForce RTX 2070 Super and GeForce RTX 2060 Super. In a world without the Supers, AMD’s card would have been faster and less expensive right out of the gate. But if Nvidia’s claim that GeForce RTX 2070 Super is 16% faster than a vanilla 2070 turns out to be true, the Radeon loses its advantage and must do battle without ray tracing support.

A $380 Radeon RX 5700 similarly splits the GeForce RTX 2060 Super and GeForce RTX 2060. Nvidia says its 2060 Super averages 15% better performance than the standard 2060, which could make it slightly faster than Radeon RX 5700 with the added benefit of those fixed-function RT cores. Of course, a $20-higher price tag will give gamers something to think about if both cards trade blows.

Nvidia isn’t trying to woo enthusiasts with bargain pricing here. It’s charging as much as possible at each performance point, while addressing the competition in today’s top titles. The addition of real-time ray tracing support is where the company hopes to push future-minded gamers over the edge. And with a list of ray-traced games that keeps on growing, it’s getting harder and harder for skeptics to call the technology a gimmick.

Nvidia presents GeForce RTX 2070 Super as a faster version of the vanilla 2070, which just so happens to outperform the GeForce GTX 1080 Ti. Drilling down, though, the 2070 Super is built on an entirely different GPU than its predecessor.

The card we introduced in Nvidia GeForce RTX 2070 Founders Edition Review: Replacing GeForce GTX 1080 utilized a complete TU106 processor. It had nowhere left to grow. Nvidia probably could have bumped its 1,710 MHz GPU Boost rating up a bit. But if the company wanted to beat AMD’s reported Radeon RX 5700 XT performance claims, it’d need something faster.

Carving out eight of the chip’s Streaming Multiprocessors leaves a GPU with 40 active SMs spread across five or six Graphics Processing Cluster (GPC) building blocks—this number varies depending on where the SMs are excised. Multiply out the contents of each SM by 40 and you get a front-end with 2,560 CUDA cores, 320 Tensor cores, 40 RT cores, and 160 texture units.

TU104 and TU106 both boast 256-bit aggregate memory buses populated by 8GB of GDDR6 moving data at up to 448 GBps. Each of their 32-bit memory controllers is associated with 512KB of L2 cache and eight ROPs, so the two GPUs similarly feature 4MB of L2 and 64 ROPs.

The effect of adopting a larger, more sophisticated graphics processor and then goosing its clock rate does incur a substantial power penalty compared to the original GeForce RTX 2070. A 215W rating is 23 percent higher than the older card’s 175W specification, pushing power consumption higher than the 2070 Super’s average performance increase. Efficiency would appear to take a hit, then, in the interest of absolute frame rates. Incidentally, the 2070 Super does duck in under GeForce RTX 2080 Founders Edition and its 225W spec.

On the bright side, adopting TU104 means that GeForce RTX 2070 Super theoretically supports a single x8 NVLink connection capable of 50 GB/s bidirectionally. And sure enough, the Founders Edition card Nvidia sent us to test does have the physical interface exposed.

In fact, the 2070 Super looks exactly like Nvidia’s GeForce RTX 2080 Founders Edition except for a different model designator between its fans and on the backplate. That means you now need to attach one six- and one eight-pin auxiliary connector up top, rather than the single eight-pin connector on the back of GeForce GTX 2070 Founders Edition. Also, whereas Nvidia’s own 2070 exposes two DisplayPort 1.4 interfaces, HDMI 2.0b, a rare DVI-DL output, and VirtualLink support over USB Type-C, the new 2070 Super trades DVI for a third DP connector, just like GeForce RTX 2080 Founders Edition.

Nvidia had more flexibility with GeForce RTX 2060 Super. As it stood, the original 2060 already utilized a cut-down version of TU106, salvaged from imperfect processors that couldn’t be used for GeForce RTX 2070. A complete TU106 is composed of three GPCs, each with six Texture Processing Clusters. The TPCs include two SMs each, adding up to 36 SMs across the processor. By trimming off six SMs for GeForce RTX 2060, Nvidia ended up with 1,920 CUDA cores, 240 Tensor cores, 30 RT cores, and 120 texture units. The 2060 also lost two of TU106’s available memory controllers, 1MB of its cache, and 16 ROPs.

The 2060 Super benefits from a wider 256-bit memory bus, too. A complete TU106 GPU boasts eight 32-bit controllers, two of which are disabled on GeForce RTX 2060 to create an aggregate 192-bit path. Enabling them on GeForce RTX 2060 Super confers a substantial bandwidth boost, from 336 GBps to 448 GBps using the same 14 Gbps GDDR6 modules. Infusing the design with 33% more throughput has other pleasant side effects, like increasing memory capacity to 8GB, adding an extra megabyte of shared L2 cache, and exposing two more ROP partitions for a total of 64 ROP units.

Nvidia is shooting for a very specific performance profile here. Since it plans to continue selling GeForce RTX 2060, the company needed something notably faster, but not such an improvement that it’d outmaneuver existing GeForce RTX 2070 cards. The GeForce RTX 2060 Super adeptly slips into its lineup to serve this exact purpose. We’re not entirely convinced the extra model was necessary. However, someone at Nvidia wanted to bookend AMD’s upcoming Radeon RX 5700 with competitively-priced cards armed with RT cores so they could say, “Look, we do everything they do, plus ray tracing.” A $400 GeForce RTX 2060 Super was the result.

Display outputs on Nvidia’s own Founders Edition card look the same as the board we reviewed in Nvidia GeForce RTX 2060 Review: Is Mainstream Ray Tracing For Real? You get two DisplayPort 1.4 interfaces, HDMI 2.0b, and the rare DVI-DL port. It still supports VirtualLink over a USB Type-C connector. And, like the other RTX 20-series cards, you can use all four display outputs simultaneously for multi-monitor arrays.

A single eight-pin power connector on the back should pose no fitment issues. Because 2060 Super is just as short as the 2060 Founders Edition, a cable coming out of its back won’t bump up against low-hanging hard drive cages. And it sure looks better than a connector jutting forward. The 2060 Super’s board power rating does jump to 175W from the 2060’s 160W specification. But nine percent-higher power consumption is a no-brainer when it yields 13.5 percent-faster average frame rates across our benchmark suite.

Up front, Nvidia utilizes the same pair of 8.5cm, 13-blade axial fans found on all of its other Founders Edition models, which blow through a vertically oriented fin stack underneath. While we still miss the centrifugal fan and acrylic window of Nvidia’s previous reference cards, there’s no doubt that 2060 Super is built sturdily and with high-quality materials.