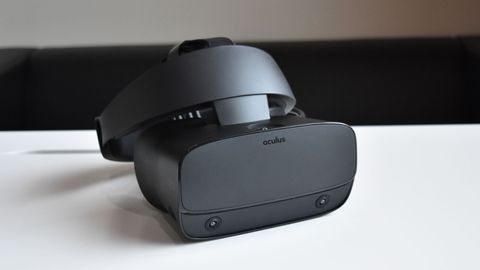 There's a fair bit to like about the Rift S. But the original set a high bar that this model doesn’t really move higher. If you're shopping for your first VR setup, it's worth considering. But no one should upgrade to the Rift S.

First-Gen VR Gets a Reboot

The Oculus Rift S ($399 / £399) VR headset replaces the original Oculus Rift, but it isn’t a successor in the traditional sense of the word. Oculus is not calling the Rift S a second-generation device, which begs the question: What is the purpose of the Rift S headset?

To help unravel the answer, we put the Rift S through its paces.

The first thing that comes to mind when I look at the Rift S is that it doesn’t look like an Oculus product. Between the design of the Rift, as well as the Oculus Go and Oculus Quest, Oculus products generally share a distinct design language. Oddly, the new Rift S does not resemble its siblings in the same way. But that’s because Oculus didn’t design the Rift S, as bizarre as that seems.

Oculus was busy developing the Quest standalone headset, so it outsourced the design of the Rift S. The company partnered with Lenovo to help manufacture the Rift S, and Lenovo turned to Sony to license the PlayStation VR (PSVR's) industrial design for the new headset. The Rift S isn’t a carbon copy of the PSVR, but there are many distinct features that carry over from Sony’s headset.

Like the PSVR, the Rift S includes a button on the lower left that lets you to adjust the distance of the visor from your face to make room for eyeglasses. The headset also features a rigid strap with a dial for adjustment found on the rear. The shape of each component is slightly different, but the Rift S’ design looks like it was derived from the PSVR.

The Rift S even shares the single-display specification of the PSVR, which means that the new headset can’t offer mechanical IPD (interpupillary distance, the amount of space between your eyes) adjustment. Oculus provides software to calibrate the IPD spacing, but the range of the Rift S is narrower than the original Rift.

The Rift S headset may only have one display, but at least it offers improved visuals. The original Rift offered a combined resolution of 2160 x 1200, whereas the Rift S ups the ante to 2560 x 1440.

However, the original Rift included an AMOLED display, which produced deep blacks and rich color. The new headset includes a fast-switching LCD screen, which limits its ability to reproduce true black levels.  The upshot is that the display in the Rift S features an RGB stripe sub-pixel array, which improves image clarity and reduces screen door effect.

Despite having more pixels to drive, the Rift S supports the same entry-level PC requirements as the original Rift. Oculus countered the higher resolution with a lower refresh rate to maintain a similar fill rate.

When Oculus launched the Rift, the company said that a 90 Hz refresh rate was the sweet spot that enabled most people to enjoy VR without motion sickness. These days, the company doesn’t seem as concerned with that figure, and given our experience with the 72 Hz Quest and now the 80 Hz Rift S, we would agree that the need for 90 Hz was grossly overstated in the early days of consumer VR. After spending a week using the Rift S, I can’t tell the difference between 90 Hz and 80 Hz.

The Rift S features an improved tether cable compared to the original model. At  5m, the new cable is a meter longer than that of the Rift. It's also a thicker gauge, which in theory should be more resistant to twisting. The new cable also features a DisplayPort interface, as opposed to the HDMI interface on the original model. The package includes a DisplayPort-to-Mini-DisplayPort port adapter to enable support for some laptops, but the Rift S does not support laptops with HDMI only.

The original Rift included built-in headphones that you could adjust to fit directly over your ears. The Rift S doesn’t include headphones, but it does offer a built-in audio solution.

Like the Go and Quest, the Rift S includes small speakers in the head strap that pump audio towards your ears. The sound quality is acceptable, but unlike with the Quest and Go, the Rift S’ speakers are relatively far from your ears. As a result, everyone around you can hear nearly as clearly as you can.

The headset includes an audio jack on the left side, but the head strap design makes it difficult to wear most gaming headsets.

Oculus offers an earbud accessory, but it doesn’t sell headphones like the ones from the original Rift.

The cushions on the Rift S are perhaps the most disappointing aspect of the new headset. If there’s one thing that I’ve learned about VR devices, it’s that sharing them is wholly unpleasant when you can’t clean the cushions easily.

No headset maker gets the cushion part right, but the Rift S really gets it bad. The rear and front cushions on the head strap are made of a soft foam material that isn’t moisture resistant. After a few rounds of an active game, these cushions become a sodden mess that is downright unpleasant.

To make matters worse, the cushions are glued to the head strap, so replacing them with an aftermarket product isn’t possible.

The face cushion isn’t much better than the head strap cushions. The foam feels cheap and doesn’t offer much padding. It’s also glued to the headset and absorbs sweat like a sponge. Luckily, this one may be replaceable because the whole facial interface is removable. Hopefully, aftermarket options will debut soon.

Tracking From the Inside

The biggest change between the Rift and the Rift S is the tracking system. For the first-generation Rift, Oculus developed tracking technology called Constellation that relied on external cameras that must be placed strategically in your room. The Rift S uses the company’s new Insight tracking system, which derives its position data from cameras that are inside the headset. It’s the same technology that the Quest uses, but the Rift S uses a slightly different camera configuration.

The Quest includes four cameras, whereas the Rift S has five. There are two cameras on the front of the Rift S. Oddly, Oculus chose to partially occlude the front cameras with an overhang on the front face of the headset. Fortunately, the company stuck one camera on the top center of the visor to keep track of your hands when you raise them above your head. The final two cameras are on either side of the device.

Oculus’ Insight tracking is quite robust. The room tracking seemed to work flawlessly as long as there was light in the room, and tracking for the new Oculus Touch controllers was nearly as good. I did notice a few hiccups with the controller tracking, but that seldom occurred, and I wasn’t able to replicate it when it did.

Next Page Setup, Performance and Conclusion
No comments yet Comment from the forums